Zoe Hart is an English actress.

Born in 1975, an actress from a young age, Hart made her stage debut aged five and television debut a year later in Minipops!

A keen dancer, Hart originated several roles on the West End, and later became a Pilates instructor. In 2010, she appeared at the Anniversary Concert for Les Misérables, along with much of the original cast.

Hart made her stage debut as Gretl Von Trapp in The Sound of Music, and five years later was one of three actresses to originate the role of Young Cosette in Les Misérables.

Some time later, Hart originated another role, that of Young Jenny in Aspects of Love. She also played Kathy in the 2000 revival of Singin' in the Rain. 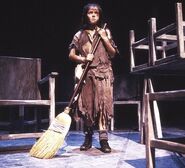 Young Jenny in Aspects of Love.

Kathy Selden in Singin' in the Rain.
Add a photo to this gallery
Retrieved from "https://goldenthroats.fandom.com/wiki/Zoe_Hart?oldid=44953"
Community content is available under CC-BY-SA unless otherwise noted.