William Parry is an American actor.

Born in Steubenville, Ohio, Parry would make his stage debut in 1971 and predominantly appear in stage musicals, though he would often take up non-singing roles in these productions, such as when appearing as Roosevelt in Knickerbocker Holiday.

Onscreen, Parry made several television appearances, guest-starring in such shows as Ryan's Hope, The Equalizer and Law and Order. He also made appearances in films including In & Out and Domestic Disturbance.

An experienced stage musical performer, Parry made his stage musical debut as the Third Priest in Jesus Christ Superstar on Broadway before going on to originate a number of roles, notably playing Charles Redmond in Sunday in the Park With George, The Proprietor in the original cast of Assassins and Papa Mizner in Road Show.

Parry would also appear as Lieutenant Barri in both the original stage and film versions of Passion and providing Chorus vocals in Home on the Range. Later stage roles would include Papa Longstreet in High Button Shoes and Captain Smith in Titanic.

Joseph and the Amazing Technicolor Dreamcoat (1976)

The Misanthrope (1977)(originated the role)

Sunday in the Park With George (1984)(originated the role)

Welcome to the Club (1988)(originated the role) 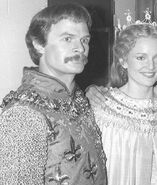 The Proprietor in Assassins.