Vincent Pastore is an American actor.

Born in The Bronx, New York, Pastore made his acting debut in 1988 and made small appearances in such films as Goodfellas, Carlito's Way and The Jerky Boys: The Movie. He played a larger role as Angelo Ruggiero in the television movie Gotti before being cast as Salvatore "Big Pussy" Bonpensiero in The Sopranos.

Pastore made a number of other television appearances in such shows as Law & Orders and Everybody Hates Chris as well as the films Mickey Blue Eyes, Zootopia and Revolver. He also had voice roles in Shark Tale and Penguins of Madagascar.

Pastore made two stage musical appearances; as Amos Hart in Chicago and as Nick Valenti in the original cast of Bullets Over Broadway.

Bullets Over Broadway (2014)(originated the role) 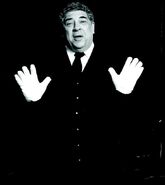 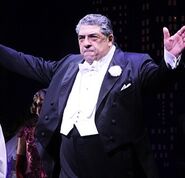 Nick Valenti in Bullets Over Broadway.
Add a photo to this gallery
Retrieved from "https://goldenthroats.fandom.com/wiki/Vincent_Pastore?oldid=49224"
Community content is available under CC-BY-SA unless otherwise noted.