Victoria Mallory was an American actress.

Born in Richmond, Virginia as Victoria Morales, she studied at AMDA and made her big break on Broadway working with Stephen Sondheim, which included having a part written for her in Follies.

Mallory also became a television actress, appearing in such shows as Touched By An Angel and most famously The Young and Restless. She passed away in 2014.

Mallory had a large number of stage credits to her name, frequently working with Stephen Sondheim, including her debut in West Side Story and origination of the roles of Young Heidi in Follies and Anne Egerman in A Little Night Music.

Mallory also played Lili in a revival production of Carnival! and Marsinah in Kismet. 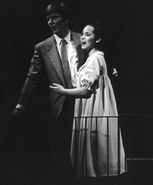 Maria in West Side Story. 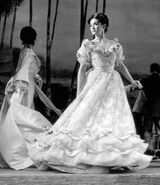 Anne Egerman in A Little Night Music.
Add a photo to this gallery
Retrieved from "https://goldenthroats.fandom.com/wiki/Victoria_Mallory?oldid=49078"
Community content is available under CC-BY-SA unless otherwise noted.