Victor Mature was an American actor.

Born in Louisville, Kentucky, he studied and performed at the Pasadena Playhouse but gained attention after being cast Tumak in One Million B.C. leading to roles in a number of musicals such as No, No, Nanette as well as the widely acclaimed western My Darling Clementine.

However, Mature found his niche in Biblical and epic pictures such as The Robe, Demetrius and the Gladiators and Samson and Delilah. After a period of retirement he appeared in more comic, often self-parodying productions such as After the Fox, Head and Every Little Crook and Nanny.

After originating the role of Randy in Lady in the Dark, he performed the song "I'll Be Marching to a Love Song" in Footlight Serenade and segments of several numbers with his fellow soldiers in Seven Days' Leave. He also performed two duets with Rita Hayworth on her self-named album. 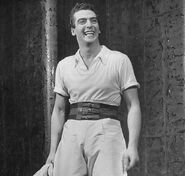 Randy Curtis in Lady in the Dark. 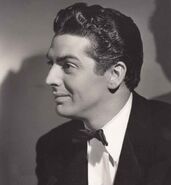 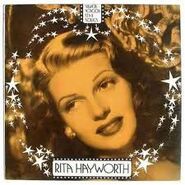 Rita Hayworth.
Add a photo to this gallery
Retrieved from "https://goldenthroats.fandom.com/wiki/Victor_Mature?oldid=52680"
Community content is available under CC-BY-SA unless otherwise noted.