Tug Wilson is an American actor.

Born in Philadelphia, Wilson graduated at the University of Houston and spent a year as a cast member at Six Flags amusement park before beginning his career as a musical theatre performer.

Though an incredibly prolific musical performer, Wilson later turned his attentions to writing, creating several successful revues including No String Attached, as well as working as a pianist. After a near death experience in 2013, he became a vocal, music and songwriting coach.

Wilson began his musical career with the group "Theatre Under the Stars" appearing in the ensemble of Fiddler on the Roof. This was followed by a number of ensemble appearances, though he also played Dick Powell in Dames at Sea and Doody in Grease. In 1981 he played Peter in Jesus Christ Superstar.

Wilson subsequently focused on songwriting and cabaret, though he also originated the role of Lord Savage in Jekyll & Hyde at the Alley Theatre, before appearing in a second Frank Wildhorn production, Svengali. 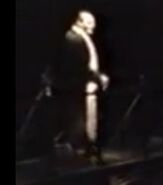 Lord Savage in Jekyll & Hyde.
Add a photo to this gallery
Retrieved from "https://goldenthroats.fandom.com/wiki/Tug_Wilson?oldid=49148"
Community content is available under CC-BY-SA unless otherwise noted.