Tom McGowan is an American actor.

Born in Belmar, New Jersey, McGowan studied at the Yale School of Drama and developed a strong career onstage, receiving a Tony Award nomination for his appearance in La Bête and an Obie for his role in the Off-Broadway show The Food Chain.

McGowan also became well known for his roles onscreen, portraying the affable station manager Kenny Daly in Frasier and as Bernie in Everybody Loves Raymond. He made a number of appearances in films, including Sleepless in Seattle and As Good as It Gets.

McGowan performed in three stage musicals, playing the sympathetic role of Amos Hart in Chicago, appearing as The Wizard in both Broadway and West End productions of Wicked and taking over the role of Ladislav Sipos in a 2016 production of She Loves Me. 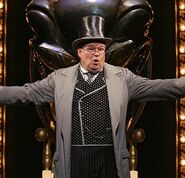 The Wizard in Wicked.
Community content is available under CC-BY-SA unless otherwise noted.