Timothy Spall is a British actor.

Born in Battersea, Spall studied at both the National Youth Theatre and RADA and become a known theatrical player, before gaining wider acclaim in Auf Wiedersehen, Pet.

Spall became a recognised figure international after his appearances in blockbusters such as The Last Samurai and the Harry Potter series, as well as frequent collaborations with Mike Leigh, notably Mr. Turner, for which he won critical acclaim.

Though not a traditional singer, Spall has sung in numerous films and television productions, beginning with Mike Leigh's Topsy-Turvy, in which he plays Richard Temple, Gilbert and Sullivan's favourite bass-baritone. He also appears on the soundtrack of Kenneth Branagh's adaptation of Love's Labour's Lost, performing the classic Cole Porter number "I Get a Kick Out of You".

Over the next few years, Spall played characters who sang briefly in Lucky Break, My House in Umbria and Pierrepoint, but he would not make an appearance in another musical until Sweeney Todd: The Demon Barber of Fleet Street in 2007, in which he played the sycophantic Beadle Bamford. He also sang briefly in the comic television series Blandings.

Richard Temple as The Mikado in Topsy-Turvy. 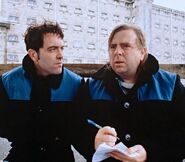 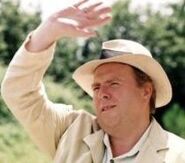 Quinty in My House in Umbria. 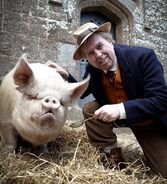