Man of La Mancha as Dr. Sanson Carrasco/The Duke
Lady in the Dark as Chauffeur
The Rothschilds as Amshel Rothschild (original Broadway cast), Nathan Rothschild
The Beggar's Opera as Macheath
Pretzels (original cast)
The Baker's Wife as Teacher (original cast)
The Moony Shapiro Songbook as Various Roles
Colette as Willy
Cats as Bustopher Jones/Asparagus/Growltiger
Me and My Girl as Herbert Parchester
Grand Hotel as General Director Preysing/Saxonia Mills (original cast)
The Petrified Prince as Cardinal Pointy (original cast)
Everyone Says I Love You as ER Doctor
Beauty and the Beast as Maurice
Cradle Will Rock as Bert Weston
La Bohème as Ensemble, Alcindoro/Benoit (understudy)
Tarzan as Professor Archimedes Q. Porter (original Broadway cast)
My Fair Lady as Alfred P. Doolittle
The Phantom of the Opera as Richard Firmin

Timothy Jerome is an American actor.

Born in Los Angeles, California, Jerome studied at the Cornell University, Ithaca College and the Manhattan School of Music before making his stage debut on Broadway in 1965. Jerome soon became well known as a stage performer, and would later go on to receive a Tony Award nomination for his performance in 1987's Me and My Girl.

In addition to his stage career, Jerome also appeared in a number of television series such as Barney Miller and Law and Order as well as films including Spider-Man 2 and Billy Bathgate.

Jerome made his musical debut as Dr. Sanson Carrasco in Man of La Mancha, appeared as Amshel in the original cast of The Rothschilds and the Teacher in The Baker's Wife. He also appeared in the revues Pretzels and The Moony Shapiro Songbook and originated the role of Professor Porter in the Disney musical Tarzan.

Jerome later appeared in Cats in the roles of Asparagus and Bustopher Jones, Alfred P. Doolittle in My Fair Lady and Richard Firmin in The Phantom of the Opera. Onscreen, he sang briefly in Everyone Says I Love You and Cradle Will Rock in which he played Bert Weston. 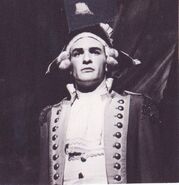 Macheath in The Beggar's Opera. 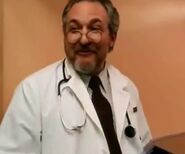 E.R. Doctor in Everyone Says I Love You. 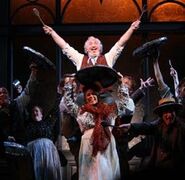 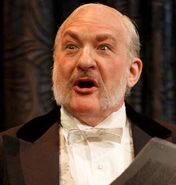 Richard Firmin in The Phantom of the Opera.
Add a photo to this gallery
Retrieved from "https://goldenthroats.fandom.com/wiki/Timothy_Jerome?oldid=46704"
Community content is available under CC-BY-SA unless otherwise noted.