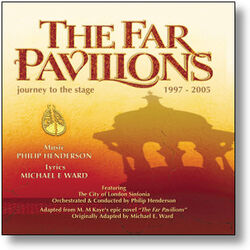 The Far Pavilions is a musical based on the novel by M.M. Kaye.

Set in 19th Century India, the story revolves around an orphaned boy, Ashok, initially raised by an Indian woman before learning that he is actually of English parentage. He is sent to the mother country, receives a British education, and as Lieutenant Ashton Pelham-Martyn, returns to India as a British army officer. Now his loyalties and emotions are torn in different directions.

As a boy he lost his heart to Princess Anjuli, the Maharajah’s daughter, and witnessed a vile murder committed by the girl’s wicked stepmother, Janoo Rani. As a man he has to struggle with his sense of identity and his conflicting emotions - still in love with Anjuli, but engaged to the very English Belinda – until she rejects him because of his “Indian” upbringing – and then suffering further rejection by some of his regiment when they learn of his background.

However, in all the machinations, warmongering and politicking of the British Raj, his adoring best friend, Lieutenant Walter Hamilton, in the siege of Kabul, sacrifices his own life to save Ashton and finally enables Ash and Anjuli to depart into the sunset, clearly on their way to their own Shangri-La.

Retrieved from "https://goldenthroats.fandom.com/wiki/The_Far_Pavilions_(musical)?oldid=53371"
Community content is available under CC-BY-SA unless otherwise noted.