Beginning her career as a dancer, Tanner became a performer on an American cruise ship, performing shows and music. upon returning to England she became a successful classical stage actress, joining the Royal Shakespeare Company. She was one of three members of the company who was cast in Les Misérables, along with Roger Allam and Alun Armstrong.

As well as stage roles, Tanner also made a number of television and film appearances, including the 1998 comedy The Parole Officer and the BBC production of The Mayor of Casterbridge.

After succeeding Barbara Windsor in the tour of Calamity Jane , Tanner created one of her most famous roles, that of Jellylorum/Griddlebone in Cats (a role she would reprise for the taped production). In 1985, she originated another role; Madame Thénardier in Les Misérables, and another would follow in 2006, as Aunt Pittypat in the musical Gone With the Wind. 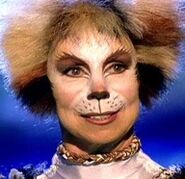 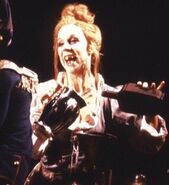 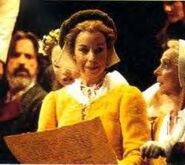 Madame De Rois in Martin Guerre.
Add a photo to this gallery
Retrieved from "https://goldenthroats.fandom.com/wiki/Susan_Jane_Tanner?oldid=47376"
Community content is available under CC-BY-SA unless otherwise noted.