As well as his musical roles, Anderson appeared in plays including The Kentucky Cycle and The Crucible. He also appeared in such television shows as Law & Order and Daredevil.

Anderson appeared in a wide variety of stage musicals, originating roles in Violet, The Capeman and most notably as Reverend Shaw Moore in the original production of Footloose.

Anderson went on to play multiple parts in such musicals as The Adventures of Tom Sawyer, Wicked and the final run of Spider-Man: Turn Off the Dark.

The Adventures of Tom Sawyer (2001)(originated the role) 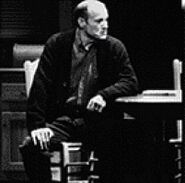 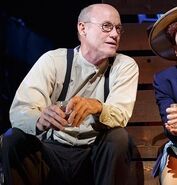 Daddy Murphy in Bright Star.
Add a photo to this gallery
Retrieved from "https://goldenthroats.fandom.com/wiki/Stephen_Lee_Anderson?oldid=45401"
Community content is available under CC-BY-SA unless otherwise noted.