Sarah Greene is an Irish actress.

Born in Cork, Ireland, she studied at the Gaiety School of Acting and became a noted stage actress, appearing in such plays as The Empress of India and The Ferryman as well as receiving Olivier and Tony nominations for her role in The Cripple of Inishmaan.

Greene also had a number of roles on film and in television, notably playing Sinead Mulligan in The Guard and Hecate Poole in Peaky Blinders.

Greene performed the song "The Parting Glass" in the video game Assassin's Creed IV: Black Flag, where she played the pirate Anne Bonney. 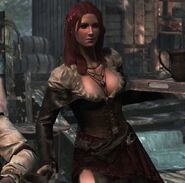 Anne Bonney in Assassin's Creed IV: Black Flag.
Add a photo to this gallery
Retrieved from "https://goldenthroats.fandom.com/wiki/Sarah_Greene?oldid=44929"
Community content is available under CC-BY-SA unless otherwise noted.