The King and I as Anna
Sweeney Todd: The Demon Barber of Fleet Street as Lucy Barker/Beggar Woman (video)
Nicholas Nickleby
Sunday in the Park With George as Old Lady/Nurse/Yvonne/Naomi Eisen/Harriet Pawling/Blair Daniels

Woods grew up in Indianapolis, spending two years in the Sacramento Theatre Company, with whom she played Eleanor in The Lion in Winter. She made a number of regional theatre appearances, before moving onto Broadway.

As well as stage appearances, Woods also appeared in soaps such as Days Of Our Lives and As the World Turns. In 1992, her husband died of a heart attack, leading her to ultimately retire from acting (which she had been considering for some time) and to become an intuitive counselor through the Church of Enthusiam and Joy. She released a spoken word poetry album entitled And I Will Comfort You - Grandmother's Poems of Love and Beauty.

A member of various different companies, including the San Jose Civic Light Opera in which she played Anna in The King and I, Woods was most famous for her appearance in the tour of Sweeney Todd: The Demon Barber of Fleet Street, in which she played the Beggar Woman, a role she reprised for the video. She also appeared in the national tour of Nicholas Nickleby.

Woods made her last singing appearance in Sunday in the Park With George, during which she made the decision to retire from acting.

The King and I

Sunday in the Park With George 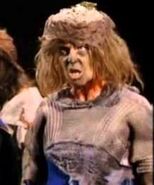 Beggar Woman in Sweeney Todd: The Demon Barber of Fleet Street.
Add a photo to this gallery
Retrieved from "https://goldenthroats.fandom.com/wiki/Sara_Woods?oldid=45180"
Community content is available under CC-BY-SA unless otherwise noted.