Ruth Kobart was an American actress.

In addition to her stage roles Kobart also appeared in a number of television series includington Remington Steele and Murphy Brown as well as films, notably Dirty Harry and the Sister Act films.

A musical performer for most of her acting career, Kobart initially worked in opera, before she originated the role of HIlda in Pipe Dream and appeared in several shows including The Cradle Will Rock and The Mikado, in which she played Katisha. Kobart also played Miss Jones in the original production of How to Succeed in Business Without Really Trying and reprised the role for the film.

How to Succeed in Business Without Really Trying (1967) 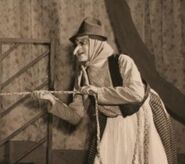 The Witch in Hansel and Gretel. 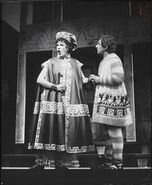 Domina and Hysterium in A Funny Thing Happened on the Way to the Forum.

Miss Jones in How to Succeed in Business Without Really Trying.

Choir Nun in Sister Act.
Add a photo to this gallery
Retrieved from "https://goldenthroats.fandom.com/wiki/Ruth_Kobart?oldid=48806"
Community content is available under CC-BY-SA unless otherwise noted.