Not the Nine O'Clock News as Various Roles
The Lion King as Zazu
Johnny English as Johnny English
Oliver! as Fagin

Rowan Atkinson is an English comedian and actor.

Born in Consett, County Durham, he performed as part of the Oxford Revue at the Edinburgh Fringe before appearing in a radio series entitled The Atkinson People. This led to his appearing in the succesful comedy series Not the Nine O'Clock News, as well as playing the star-making role of Edmund in Blackadder.

Atkinson played a number of other major television roles, notably Mr. Bean in the series and films of the same name and Inspector Fowler in The Thin Blue Line. He also appeared in such films as The Tall Guy, Rat Race and as the voice of Zazu the hornbill in The Lion King.

Atkinson sang a number of comic songs on Not the Nine O'Clock News including "Kinda Lingers" and "I Like Bouncing." He also sang "I Just Can't Wait to Be King" in The Lion King and played Fagin in the 2009 revival of Oliver!. Atkinson would also contribute to a musical comedy sketch in 2013 where he performed "Goodness Gracious Me."

Not the Nine O'Clock News. 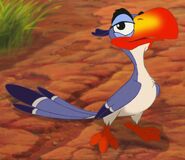 Zazu in The Lion King. 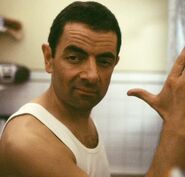 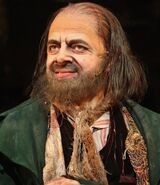 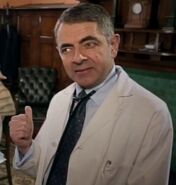 Goodness Gracious Me.
Add a photo to this gallery
Retrieved from "https://goldenthroats.fandom.com/wiki/Rowan_Atkinson?oldid=48555"
Community content is available under CC-BY-SA unless otherwise noted.