Roscoe Lee Browne was an American actor and writer/director.

Born in Woodbury, New Jersey, he served in World War II and was an athlete before becoming a stage actor in 1956. He made his onscreen debut in Topaz and went on to appear in Logan's Run, Jumpin' Jack Flash and The Mambo Kings as well as roles in series such as Sanford and Son and Soap.

Browne's rich baritone led to an extensive voiceover career, providing narration and voicing such characters as The Kingpin in Spider-Man: The Animated Series and Mr. Arrow in Treasure Planet. He also wrote and directed the play A Hand Is on the Gate and toured with fellow actor Anthony Zerbe with the poetry concert Behind the Broken Words.

Browne portrayed the Street Singer in The Threepenny Opera and Reverend Montgomery in My One and Only as well as briefly performing as Francis in Oliver & Company. 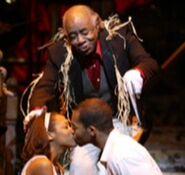 The Houngan in House of Flowers.
Community content is available under CC-BY-SA unless otherwise noted.
Advertisement