Ronald Holgate is an American actor.

Born in Aberdeen, South Dakota, he studied acting at Northwestern University before going on to study opera and go on tour with the New England Opera Theatre.

Holgate would become well known for both his operatic and regular musical roles (winning the Tony Award for Best Featured Actor in a Musical), but would also appear in a number of straight plays, notably originating the role of Tito Morelli in Lend Me a Tenor.

Holgate lent his rich baritone to a number of singing roles, notably originating the role of Miles Gloriosus in A Funny Thing Happened on the Way to the Forum and Richard Henry Lee in 1776 (a part he reprised for the film adaptation. As a trained opera singer, he also appeared in a number of classical roles, as well as Lucius in the 1974 opera Philip Marshall.

Holgate continued to create new roles in new musicals such as The Grand Tour and Musical Chairs, but he also appeared in a number of revivals, including Guys and Dolls (as Big Jule) and Kiss Me, Kate (as Harrison Howell. 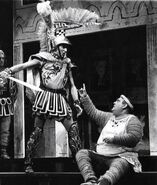 Miles Gloriosus and Pseudolus in A Funny Thing Happened on the Way to the Forum. 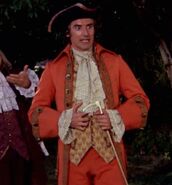 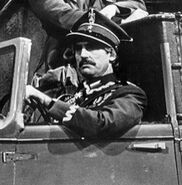 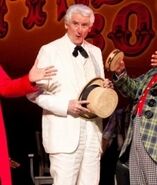 The Interlocutor in The Scottsboro Boys.
Add a photo to this gallery
Retrieved from "https://goldenthroats.fandom.com/wiki/Ronald_Holgate?oldid=50867"
Community content is available under CC-BY-SA unless otherwise noted.