Roger Allam is an English actor.

Born in Bow, London, Allam was a member of the Royal Shakespeare Company and became predominantly known for his Shakesperian roles on stage, before becoming well known after his breakthrough in Les Misérables. Allam later branched out into films (where he usually played sneering villainous characters or pompous members of upper classes) and television, where he notably appeared in the political comedy The Thick of It as wearied MP Peter Mannion, and in the Inspector Morse prequel Endeavor as Morse's mentor DI Thursday.

He won the Olivier Award for Best Actor for his portrayal as Falstaff in Henry IV Parts I & II and was nominated on three other occasions. He also appeared opposite Ian McKellen in the pantomime Aladdin, playing the evil Abanazer.

He was one of three actors from the RSC selected to appear in the original Barbican production of Les Misérables (the others being Alun Armstrong and Susan Jane Tanner) and campaigned for his solo "Stars" to remain in the production. In 1993 he appeared in the West End revival of City of Angels, for which he was nominated for an Olivier Award.

Allam did not often return to musical roles, though he played Count Fosco in the original workshop of The Woman in White, Terri Dennis in the musical play Privates on Parade, and appeared with fellow Javert actor Philip Quast in La Cage Aux Folles in 2009. He can also be heard singing during two episodes of the radio series Cabin Pressure. At the encore performance of the 25th Anniversary concert for Les Misérables, Allam joined his castmates to sing "One Day More".

Stone in City of Angels. 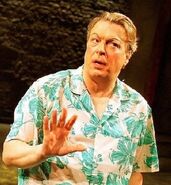 Terri Dennis in Privates on Parade. 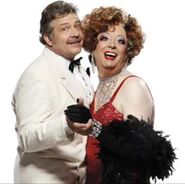 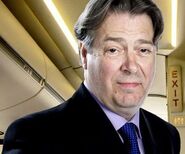