Ray Middleton was an American actor.

Born in Chicago, Illinois, Middleton became noted for being the first actor to play Superman, and appeared in a number of films including Hurricane Smith and Lady for a Night. He gained his widest recognition for stage roles, and appeared in the original production of Annie, Get Your Gun.

In his later career, Middleton made a number of television appearances, including a television film adaptation of Damn Yankees and M*A*S*H.

Middleton sang in a number of film and stage roles, beginning with originating the part of Washington Irving in Knickerbocker Holiday before his supporting lead as Frank Butler in Annie, Get Your Gun.

Middleton also appeared in the musical film I Dream of Jeanie, which included a number of solos, such as "Oh! Susanna." In 1965 he originated the role of The Innkeeper in Man of La Mancha, who dubs Don Quixote "Knight of the Woeful Countenance." 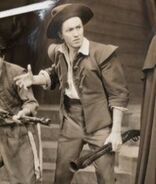 Frank Butler in Annie, Get Your Gun. 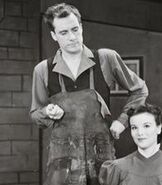 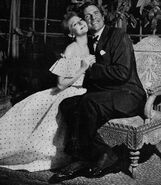 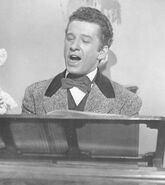 Edwin P. Christy in I Dream of Jeannie.

The Innkeeper in Man of La Mancha.
Add a photo to this gallery
Retrieved from "https://goldenthroats.fandom.com/wiki/Ray_Middleton?oldid=47265"
Community content is available under CC-BY-SA unless otherwise noted.