The Prince of Egypt (film soundtrack)

Ralph Fiennes is an English actor.

Born in Ipswich, Fiennes studied at RADA and performed with the Royal Shakespare Company before making his film debut as Heathcliff in Wuthering Heights. In 1993 he appeared as the Nazi Amon Goeth in Schindler's List, for which he won an Oscar nomination. This also marked the first in a series of villainous roles, including Lord Voldemort in the Harry Potter series, Hades in Clash of the Titans and the foul mouthed but moralistic hitman Harry Waters in In Bruges. More benevolently, he portrayed "M" in the James Bond series.

Winning an Oscar in 1996 and a Tony for playing Hamlet on Broadway, Fiennes mixed stage and screen acting with directing, making his debut with the film Coriolanus in 2011, in which he also played the lead.

In his vast career, Fiennes sang in several different film appearances. Firstly, as the wounded pilot Laszlo de Almásy, he sings a few lines of the standard "The Darktown Strutter's Ball".

In later appearances, his singing roles would expand; as Ramses in The Prince of Egypt angrily lamenting the broken bond between himself and Moses and in 2006's Bernard and Doris, performing a duet version of "I Love the Way You're Breaking My Heart". He also sang the ballad "Worried About You" in the comedy drama A Bigger Splash.

Rameses in The Prince of Egypt.

Bernard Lafferty in Bernard and Doris. 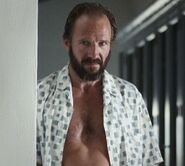 Harry Hawkes in A Bigger Splash.
Community content is available under CC-BY-SA unless otherwise noted.
Advertisement