Mack the Knife as Polly Peachum
Spread a Little Happiness

Rachel Robertson is an English actress.

Robertson made her film debut in Until September before appearing in such miniseries as William Tell and Act of Will. She also had guest appearances on Jeeves and Wooster and The Bill, as well as portraying Rose in The Jungle Book.

Robertson's largest singing role was playing Polly in Mack the Knife, the film adaptation of The Threepenny Opera. She also appeared in the revue Spread a Little Happiness. 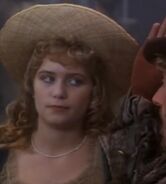 Polly Peachum in Mack the Knife.

Spread a Little Happiness.
Add a photo to this gallery
Retrieved from "https://goldenthroats.fandom.com/wiki/Rachel_Robertson?oldid=53239"
Community content is available under CC-BY-SA unless otherwise noted.