Baritone
Pierce Brosnan is an Irish actor best known for his portrayal of the titular character in the James Bond films.

Born in Navan, County Meath, Brosnan first rose to fame as Remington Steele, a role which led to him being offered the role of James Bond after Roger Moore left the series. However, contractual obligations prevented Brosnan from accepting until almost a decade later, taking over from Timothy Dalton. He played Bond for four films and the computer game Everything or Nothing before bowing out.

Other than Bond, Brosnan has appeared in a number of comic roles, such as Guy Shepherd in The World's End and as disgraced novelist Martin in A Long Way Down, as well as dramatic ones including former Prime Minister Adam Lang in The Ghost Writer.

Brosnan first performed in the 2004 film Evelyn, in which he sang two drinking ballads. In Mamma Mia! he took on the role of Sam Carmichael, one of the lead character's three potential fathers, and joined a predominantly untrained cast in singing hits by ABBA. He would later reprise this role in the film's sequel; Mamma Mia!: Here We Go Again. 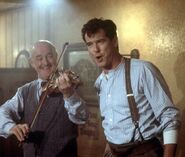 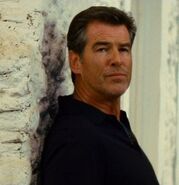