The Gay Invalid as Valentine
The Morecambe & Wise Show

Peter Cushing was an English actor.

Born in Kenley, Surrey, he studied at the Guildhall School of Music and Drama and worked in repertory theatre before making his screen debut in 1939's The Man in the Iron Mask. He first gained recognition for his work on television, playing Winston Smith in Nineteen Eighty-Four and Fitzwilliam Darcy in Pride and Prejudice.

Cushing later became renowned for his work with Hammer Horror, playing such roles as Baron Victor Frankenstein and Professor Abraham Van Helsing, as well as playing a human version of The Doctor in two Doctor Who movies and the title character in the Sherlock Holmes series. In the later years of his career he portrayed the villainous Grand Moff Tarkin in Star Wars.

Cushing gave his sole musical theatre singing performance playing Valentine in The Gay Invalid, a musical version of La Malade Imaginaire. He also sang "A Couple of Swells" on The Morecambe & Wise Show.

Valentine in The Gay Invalid. 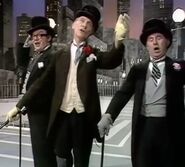 The Morecambe & Wise Show.
Add a photo to this gallery
Retrieved from "https://goldenthroats.fandom.com/wiki/Peter_Cushing?oldid=48982"
Community content is available under CC-BY-SA unless otherwise noted.