Winnie the Pooh and the Blustery Day
The Aristocats (film soundtrack)

Paul Winchell was an American actor.

Born Paul Wilchinsky in New York City, he became interested in ventriloquism from the age of 13 and became renown for his dummy characters Jerry Mahoney and Knucklehead Smiff as well as Ozwald, a character created by special effects. He later hosted a number of childrens shows as well as appearing on The Donna Reed Show and The Dick Van Dyke Show.

However Winchell gained his greatest popularity as a voice actor, playing such characters as Dick Dastardly and Gargamel, as well as performing the original voice of Tigger in the Winnie the Pooh franchise. Outside of acting, he gained a number of patents, most notably for developing an artificial heart.

As well as singing in his early, variety career, Winchell sang in several of his voice roles, performing "The Wonderful Thing About Tiggers" in Winnie the Pooh and the Blustery Day and part of "Ev'rybody Wants to Be a Cat" in The Aristocats.

Tigger in Winnie the Pooh and the Blustery Day. 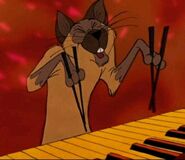 Shun Gon in The Aristocats. 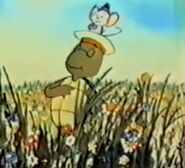 The Turtle in The Tiny Tree.
Add a photo to this gallery
Retrieved from "https://goldenthroats.fandom.com/wiki/Paul_Winchell?oldid=53031"
Community content is available under CC-BY-SA unless otherwise noted.