Paul Leonard is an English actor.

Born in Winchester, Hampshire, Leonard began his career as a stage actor, often working in musicals, though he was also frequently seen in Shakespeare plays, including Richard III (on two occasions), The Merchant of Venice and Twelfth Night (in which he played Malvolio).

Leonard also made several onscreen apoearances, in television programmes such as The Bill, Coronation Street and Sherlock as well as films including Gambit and Les Misérables.

Leonard sang in a large number of stage musicals, beginning with Oklahoma! in 1980 when he played Slim (he would later return to the show in the larger role of Jud Fry). Leonard played a number of roles in the original London production of Les Misérables, notably Combeferre, though he also understudied Enjolras and would later take on the role of Javert.

Leonard also played such roles as Firmin in The Phantom of the Opera, Mr. Peachum in The Beggar's Opera and Amos Hart in Chicago, as well as originating the role of Judge Coras in Martin Guerre. 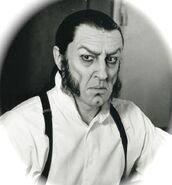 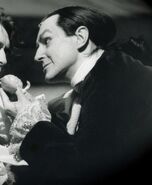 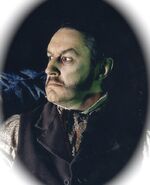 Sweeney Todd in Sweeney Todd: The Demon Barber of Fleet Street.
Community content is available under CC-BY-SA unless otherwise noted.