Paul Kandel is an American actor.

Born in Queens, New York, Kandel has generally limited himself to stage appearances, save for a few television guest appearances and a turn as the voice of Gypsy leader Clopin in The Hunchback of Notre Dame. In 2006 he was cast in the musical The Times They Are A-Changin' but was replaced prior to opening.

Kandel is best known as a musical theatre performer, beginning with revues such as Nightclub Cantata before his role as Luigi in the original production of Lucky Stiff. In 1993 he was nominated for a Tony Award for his role as the perverted Uncle Ernie in The Who's Tommy.

Kandel sang in both The Hunchback of Notre Dame and its sequel, as well as appearing in the 1998 performance of A Christmas Carol and playing King Herod in Jesus Christ Superstar.

Uncle Ernie in The Who's Tommy. 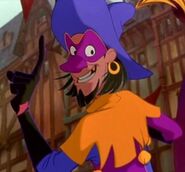 Clopin in The Hunchback of Notre Dame. 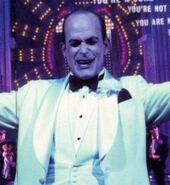 King Herod in Jesus Christ Superstar.
Add a photo to this gallery
Retrieved from "https://goldenthroats.fandom.com/wiki/Paul_Kandel?oldid=46845"
Community content is available under CC-BY-SA unless otherwise noted.