Paul Clarkson is an English actor and director.

Born in Worcester, England, Clarkson studied at the London Academy of Dramatic Art. He made his screen debut on television in 1980 and made appearances on such shows as Tripper's Day (and its follow-up Slinger's Day), The Manageress and Hollyoaks.

However, Clarkson was best known for his work on stage both as an actor and director. He appeared as Mephistopheles in Doctor Faustus and Roderigo in Othello amongst others as well as directing productions of Women in Love, The Secret Diary of Adrian Mole and The Dreaming. He subsequently served as associate director at a number of theatres, as well as teaching as Head of Acting Courses at the Bristol Old Vic.

Clarkson sang in a number of stage musical productions, notably originating the role of John Tallentire in The Hired Man (for which he won an Olivier Award) as well as that of Harry Bright in Mamma Mia!

Clarkson also starred in the West End production of A Man of No Importance and took over as both Doctor Dillamond and The Wizard in Wicked for 2014. 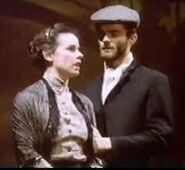 John Tallentire in The Hired Man. 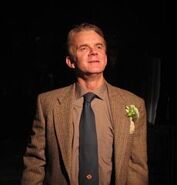 Alfie Byrne in A Man of No Importance. 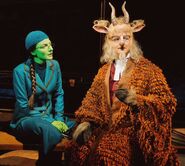 Elphaba and Doctor Dillamond in Wicked.
Community content is available under CC-BY-SA unless otherwise noted.
Advertisement