Patricia Quinn is an Irish actress.

Born in Dublin, Ireland, Quinn studied drama in London and spent a period of time in repertory theatre before being cast in AC/DC, and later The Rocky Horror Show, the role for which she would become best known. She would later go on to play the role of Livilla in the hit series I, Claudius.

In addition to her theatrical career, Quinn also made a number of film appearances, including Monty Python's The Meaning of Life and Tamara Drewe, radio work such as Doctor Who, and a secondary career as a DJ in Central London.

Though her career includes a wide array of credits, Quinn is best known for her singing work, namely the role of Magenta in The Rocky Horror Show and its subsequent film adaptation. She later starred in the spiritual sequel Shock Treatment and recorded a song for the unreleased album Open Displays of Affection. 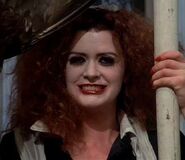 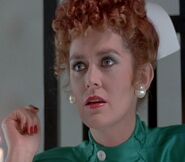