Thoroughly Modern Millie as Bun Foo
The Karate Kid as Mr. Kesuke Miyagi
Babes in Toyland as The Toymaster
Talk to Taka as Taka

Pat Morita is an American actor.

Born Noriyuki Morita in Isleton, California, he was initially a stand-up comedian and member of an improvisational troupe before making his screen debut in the television series Johnny Midnight and a notable early role as a henchman in Thoroughly Modern Millie. He went on to appear on series such as Happy Days and Mr. T and Tina before becoming a household name for his role as Mr. Miyagi in The Karate Kid and its sequels, which earned him an Academy Award nomination.

Morita also received an Emmy nomination for his role in the television film Amos, made guest appearances in Married...With Children and Spongebob Squarepants and played the Emperor of China in Disney's Mulan.

Morita first sang one of his earliest films, Thoroughly Modern Millie, where he sang "The Japanese Sandman." He also sang the solo "Eyes of a Child" in Babes in Toyland and duetted on "Something Stupid" in the short film Talk to Taka.

As well as his film appearances, Morita also sang "Fugue for Tinhorns" from Guys and Dolls with Telly Savalas and Dom DeLuise at fhe 1987 Academy Awards. 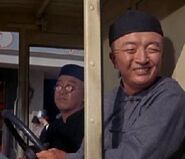 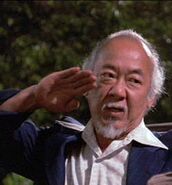 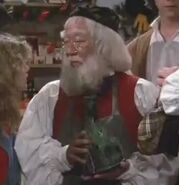 The Toymaker in Babes in Toyland. 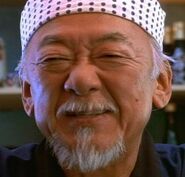 Taka in Talk to Taka.
Add a photo to this gallery
Retrieved from "https://goldenthroats.fandom.com/wiki/Pat_Morita?oldid=50060"
Community content is available under CC-BY-SA unless otherwise noted.