Nicolas Colicos is an actor.

Born in Canada, Colicos began acting in the 1980s, appearing on both stage and screen, where he made his debut in a television version of As You Like It. He made the majority of his appearances in England, including playing Mitch in Phyllida Lloyd's production of A Streetcar Named Desire, yet also made a number of stage appearances in the United States and Canada.

As well as his stage work, Colicos also made a number of appearances on the children's channel CBBC, as well as the movie of Basil Brush.

Colicos had a very prolific career on the stage, frequently on the West End stage, though he began playing Wreck in Wonderful Town and later Curly in the 1988 tour of Oklahoma!. He notably played Reuben in Joseph and the Amazing Technicolor Dreamcoat and twice played the role in video productions, Manfred in Sunset Boulevard, Bill Austin in Mamma Mia! and the gangster Bones in Sister Act.

Colicos understudied the lead role in the original production of Whistle Down the Wind and was the first actor to play Franz Liebkind in the West End production of The Producers.

Joseph and the Amazing Technicolor Dreamcoat (1999)

Joseph and the Amazing Technicolor Dreamcoat (1991) 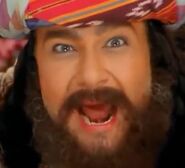 Reuben in Joseph and the Amazing Technicolor Dreamcoat.

Franz Liebkind in The Producers.
Add a photo to this gallery
Retrieved from "https://goldenthroats.fandom.com/wiki/Nicolas_Colicos?oldid=52264"
Community content is available under CC-BY-SA unless otherwise noted.