Nicolas Cage is an American actor.

Born Nicolas Coppola in Long Beach, California, he studied at the UCLA School of Theater, Film and Television and made his screen debut in Fast Times at Ridgemont High and had a number of small appearances including in his uncle Francis Ford Coppola's films Rumble Fish and The Cotton Club. However, he soon became known as an action performer, starring in, amongst others, Con Air, Face/Off and Kick Ass.

Cage made his directorial debut in 2002 and produced a number of films including Shadow of the Vampire. He provided his voice to a wide variety of films, including Christmas Carol: The Movie, The Ant Bully and The Croods.

Cage sang in several films, including Leaving Las Vegas, where he both performed and wrote "Ridiculous". He also sang "Love Me" in Wild at Heart and "Happy Together" in Adaptation.

Nicky/Bud in Racing with the Moon. 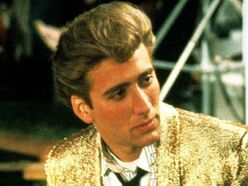 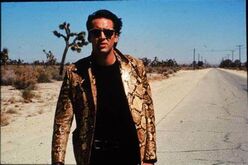 Sailor Ripley in Wild at Heart. 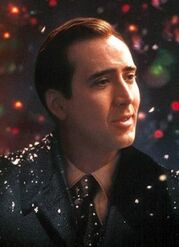 Jack Campbell in The Family Man. 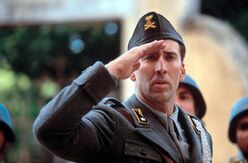 Charlie Kaufman in Adaptation.
Add a photo to this gallery
Retrieved from "https://goldenthroats.fandom.com/wiki/Nicolas_Cage?oldid=51979"
Community content is available under CC-BY-SA unless otherwise noted.