Nehemiah Persoff is an Israeli actor and artist.

Born in Jerusalem, Israel, Persoff began acting in the New York Theatre before being accepted into the Actors Studio. He had a small role in Some Like It Hot before taking on parts in such pictures as The Greatest Story Ever Told, Yentl and The Last Temptation of Christ. He also provided the voice of Papa Mousekewitz in the An American Tail series.

Persoff also had a large number of television credits , including The Untouchables, Voyage to the Bottom of the Sea and Gunsmoke. He later retired and became an artist.

Persoff appeared in the ensemble of Peter Pan (as Cecco the Pirate) and Flahooley (as Fowzi the Arab), as well as singing "There Are No Cats in America" in An American Tail. 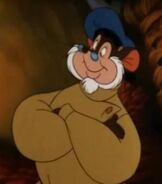 Papa Mousekewitz in An American Tail.
Add a photo to this gallery
Retrieved from "https://goldenthroats.fandom.com/wiki/Nehemiah_Persoff?oldid=53403"
Community content is available under CC-BY-SA unless otherwise noted.