Michelle Ryan is an English actress.

Born in Enfield, London, she was cast in the role of Zoe Slater in EastEnders when she was sixteen and during her tenure appeared in the play Who's Your Daddy? in 2005. She had roles in television series such as Mansfield Park, Bionic Woman and Jekyll.

Ryan also had parts in the films I Want Candy and Cockneys vs Zombies but mainly stayed in television, with shows including Merlin, Doctor Who and Death in Paradise.

Ryan played the role of Sally Bowles in Cabaret. 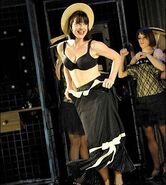 Sally Bowles in Cabaret.
Add a photo to this gallery
Retrieved from "https://goldenthroats.fandom.com/wiki/Michelle_Ryan?oldid=46145"
Community content is available under CC-BY-SA unless otherwise noted.