Michelle Federer is an American actress.

Federer became known on the stage for her appearance in Wicked, where she met her husband Norbert Leo Butz, who played Fiyero. She later understudied Julia Roberts in Three Days of Rain and made several film appearances, including Kinsey and Flannel Pyjamas.

Federer understudied the role of Adele Rice in the Lincoln Theatre's production of A Man of No Importance.

The following year, Federer originated the role of Nessarose Thropp in Wicked, a role she played for longer than any original cast member, and one she returned to in 2009. She also appeared in a concert entitled The Yellow Brick Road Not Taken, featuring songs cut from the final production. 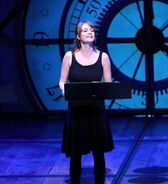 The Yellow Brick Road Not Taken.
Add a photo to this gallery
Retrieved from "https://goldenthroats.fandom.com/wiki/Michelle_Federer?oldid=44892"
Community content is available under CC-BY-SA unless otherwise noted.