Michael Ingram is an American actor.

Ingram began his show business career on television in the series Yound Dr. Malone, playing Stefan Koda. He subsequently went onto have guest roles in a number of hit television series including Sex in the City and The Sopranos.

While best known for his stage roles, Ingram made a number of film appearances, including Unforgettable, and voiced Bruno in the video game Mafia II. As well as acting, he was also a professional voice coach.

Ingram appeared in a number of stage musicals, making his debut in Saravá in 1979 before appearing in several higher profile shows including originating Captain Ahab in Moby Dick, playing Herman in the revival of Sweet Charity and gaining praise for his performance as Kalamutke in Yiddle With a Fiddle. Later, Ingram appeared in the original production of A Christmas Carol (as the Judge who sentences Scrooge's father) and Jekyll & Hyde as the lecherous Bishop of Basingstoke.

Yiddle With a Fiddle (1990)(originated the role)

A Christmas Carol (1994)(originated the role) 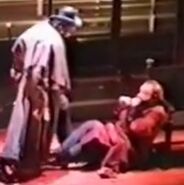 Edward Hyde and Rupert Basil, The Bishop of Basingstoke in Jekyll & Hyde.
Add a photo to this gallery
Retrieved from "https://goldenthroats.fandom.com/wiki/Michael_Ingram?oldid=46596"
Community content is available under CC-BY-SA unless otherwise noted.