Michael Caine is a British actor.

Born Maurice Micklewhite in Rotherhithe, Bermondsey, Caine had his first acting role in 1953 as Hindley Earnshaw in a production of Wuthering Heights. He soon made his film debut and reached the first peak of his career as he became an icon of the "Swinging Sixties" for his roles in films such as Alfie, The Ipcress File and The Italian Job.

In the 1970s, Caine continued to gain renown, in gangster film Get Carter and psychological thriller Sleuth. Whilst his career began to decline somewhat in the Eighties, it resurged in the Nineties and he became a popular choice for wise mentor characters, such as Alfred Pennyworth in The Dark Knight series.

Caine was nominated for an Academy Award four decades running, an acheivement equalled only by Jack Nicholson, and won two, for Hannah and Her Sisters and The Cider House Rules.

Over his long career, Caine has sung in three films, firstly in The Man Who Would Be King, singing "Dravot's Farewell" with Sean Connery. He would later sing The Muppet Christmas Carol, in which he plays the miserly Ebenezer Scrooge. Scrooge has a duet with his former fiancee Belle (or rather, the memory of her) and two songs after he has turned over a new leaf and is set about bringing joy to the world.

Caine would sing again in Little Voice, a film that would win him a Golden Globe for his part as Ray Say, a seemingly affable talent scout who half sings, half shouts a sweary rendition of Roy Orbison's "It's Over" as he realizes his hopes of success have been crushed. 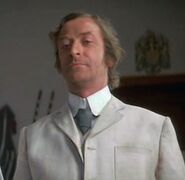 Peachy Carnehan in The Man Who Would Be King. 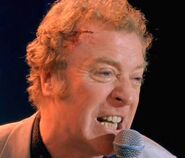 Ray Say in Little Voice.
Add a photo to this gallery
Retrieved from "https://goldenthroats.fandom.com/wiki/Michael_Caine?oldid=52594"
Community content is available under CC-BY-SA unless otherwise noted.