Merle Louise is an American actress.

Born Merle Letowt, she managed to go from a chorus girl to a leading role thanks to Ethel Merman, and became a Broadway favourite, both in musicals (where she has originated a large number of parts) and in straight roles such as Ibsen and Shakespeare. This popularity led to her being known as the link that holds Broadway together, in the same vein Kevin Bacon is used in the party game "Six Degrees of Kevin Bacon".

Louise made her musical debut in Stephen Sondheim's Gypsy, the first of several collaborations she would have with the composer, including Company, Sweeney Todd: The Demon Barber of Fleet Street (for which she won a Drama Desk Award) and Into the Woods.

In 1983, Louise appeared in La Cage Aux Folles, where she originated the role of the prudish Mme. Dindon. She has also appeared in experimental productions such as That Hat! in 1964 and Charlotte Sweet, playing the role of Cecily Macintosh. Later, she originated roles less frequently, but still played major parts such as Fraulein Schneider in Cabaret and Mme. Armfeldt in A Little Night Music. 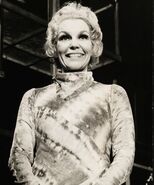 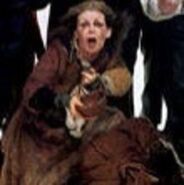 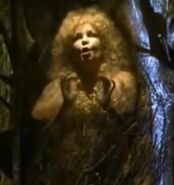 Cinderella's Mother in Into the Woods. 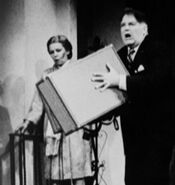 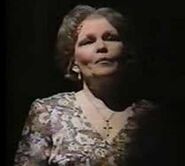 Molina's Mother in Kiss of the Spider Woman. 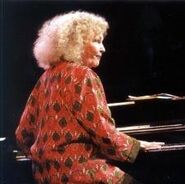 Jeanette Burmeister in The Full Monty.
Add a photo to this gallery
Retrieved from "https://goldenthroats.fandom.com/wiki/Merle_Louise?oldid=45028"
Community content is available under CC-BY-SA unless otherwise noted.