Mel Ferrer was an American actor.

Born Melchior Ferrer in Elberon Jersey, he began acting in summer stock whilst also working in a small newspaper and writing the children's book Tito's Hats before making his debut on Broadway. He soon became a contract player onscreen and made successful appearances in Scaramouche and the epic War and Peace.

Ferrer also worked as a director on occasions, directing a stage production of Cyrano de Bergerac and a film entitled The Girl of Limberlost. He also worked in a number of television productions, most notably Falcon's Crest (also directing several episodes) as wel as Columbo and Return of the Saint.

Ferrer made his sole notable singing appearance as Paul Berthalet in Lili, during which he performed the popular duet "Hi-Lili, Hi-Lo." 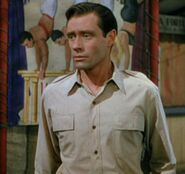 Paul Berthalet in Lili.
Add a photo to this gallery
Retrieved from "https://goldenthroats.fandom.com/wiki/Mel_Ferrer?oldid=49217"
Community content is available under CC-BY-SA unless otherwise noted.