Marilyn Cooper was an American actress.

Born in New York City, Cooper began as a chorus girl on Broadway before moving to character roles and occasionally lead parts, such as in I Can Get it for You Wholesale. She won a Tony Award for her performance in 1981's Woman of the Year.

Offstage, Cooper appeared in such television series as The Thorns (as Rose), Cheers (as Betty Sternin) and The Nanny (as Grandma Nettle) as well as films including Keeping the Faith and Penn and Teller Get Killed.

Initially an ensemble performer in several Broadway musicals, Cooper originated the role of Rosalia in West Side Story and the leading part of Ruthie in I Can Get it for You Wholesale as well as taking smaller parts in Hallelujah, Baby! and Golden Rainbow.

Generally a character performer, Cooper sang in both well known musicals (including On the Town, Mame and Grease) as well as more obscure ventures such as Two By Two, Nefertiti and Woman of the Year.

I Can Get it for You Wholesale (1962)(originated the role) 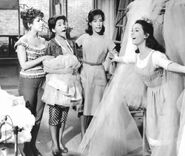 Anita and Rosalia in West Side Story. 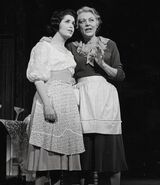 Ruthie Rivkin in I Can Get it for You Wholesale. 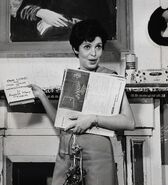 Jan Donovan in Woman of the Year.
Add a photo to this gallery
Retrieved from "https://goldenthroats.fandom.com/wiki/Marilyn_Cooper?oldid=45589"
Community content is available under CC-BY-SA unless otherwise noted.