Mae West was an American actress, playwright and burlesque artist.

Born Mary West in Kings County, New York, she initially appeared in amateur productions from the age of five and later became a vaudeville performer. Later she became a playwright, notably writing the 1926 play Sex, which caused her and several cast members to be arrested for indency, and later Diamond Lil, which brought her to Hollywood, making her debut in 1932's Night After Night.

West became famous in Hollywood for her sultry, liberated roles ridden with double entendres, which caused numerous problems with the censorship boards. She gained major critical success with her appearance in My Little Chickadee, but soon moved on to performing an act on stage when censorship damaged her film career. In later years she became labelled a film legend and returned to films, ending with Sextette in 1978.

West made her stage musical debut in A la Broadway, following which she appeared in a number of revues. Later she made her first onscreen singing appearance in She Done Him Wrong, from here on making a number of screen singing appearances (often whilst playing nightclub singers or performers in the films), including I'm No Angel, Goin' to Town and My Little Chickadee.

West continued to sing even in her later years, notably in Myra Breckinridge, as well as her final film, Sextette. She was also a prolific recording artist, frequently playing up her seductive image in such albums as The Fabulous Mae West, Way Out West and the seasonal Wild Christmas. 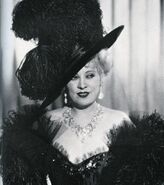 Lady Lou in She Done Him Wrong.

Tira in I'm No Angel.

Ruby Carter in Belle of the Nineties.

Cleo Borden in Goin' to Town. 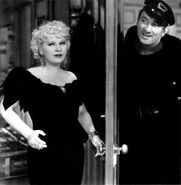 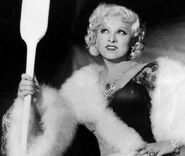 Peaches O'Day in Every Day's a Holiday. 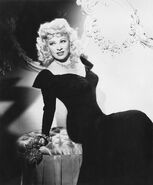 Fay Lawrence in The Heat's On. 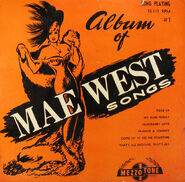 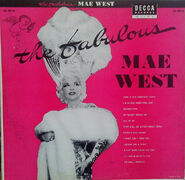 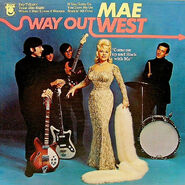 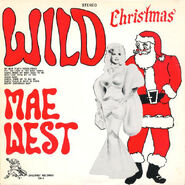 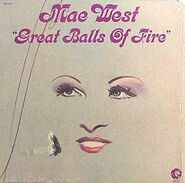 Marlo Manners and Sir Michael Barrington in Sextette.
Add a photo to this gallery
Retrieved from "https://goldenthroats.fandom.com/wiki/Mae_West?oldid=48714"
Community content is available under CC-BY-SA unless otherwise noted.