Georgy Girl as Georgy
Hellzapoppin'
The Muppet Show
The King and I as Anna Leonowens
Strike Up the Band as Mrs. Grace Draper
Company as Joanne

Lynn Redgrave was an English actress.

Born to actors Sir Michael Redgrave and Rachel Kempson, she trained at London's Central School of Speech and Drama before making her professional debut in 1962. She would soon appear in such theatrical productions as The Tulip Tree, Mother Courage and Black Comedy. She began to branch out into screen appearances, and received an Academy Award nomination for 1966's Georgy Girl. Later film works included Everything You Always Wanted to Know About Sex (But Were Afraid to Ask) and Gods and Monsters.

Whilst continuing to appear onstage in My Fat Friend and The Cherry Orchard, Redgrave also played Cleopatra in a television production of Cleopatra and appeared in such series as House Calls and Desperate Housewives. She also narrated a large number of audiobooks.

Redgrave sang in a number of both films and stage productions, notably several songs (including the title theme) in Smashing Time and a duet with Kermit the Frog on The Muppet Show. She also appeared in the musical revue Hellzapoppin' and productions of Strike Up the Band and Company. 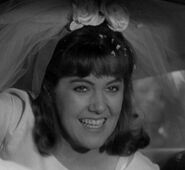 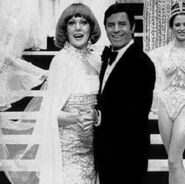 The Muppet Show.
Add a photo to this gallery
Retrieved from "https://goldenthroats.fandom.com/wiki/Lynn_Redgrave?oldid=51358"
Community content is available under CC-BY-SA unless otherwise noted.