Lloyd Bridges was an American actor.

Born in San Leandro, California, Bridges began his acting career onstage in a 1939 Broadway production of Othello, before becoming a stock actor in Hollywood. He gained success on television appearing on The Alcoa Hour, The Loner, and as Mike Nelson in Sea Hunt.

Bridges also appeared in a number of films, and in the latter part of his career made a name for himself in comedies such as Airplane! and Hot Shots!, his two sons Beau and Jeff Bridges also went on to become successful actors.

Bridges only sang briefly in his professional career, performing "For He's a Jolly Good Fellow" on an episode of Sea Hunt, and more substantially as the White Knight in the 1985 adaptation of Alice in Wonderland. 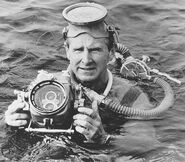 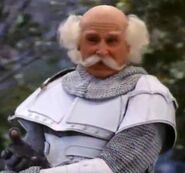 The White Knight in Alice in Wonderland.
Add a photo to this gallery
Retrieved from "https://goldenthroats.fandom.com/wiki/Lloyd_Bridges?oldid=48618"
Community content is available under CC-BY-SA unless otherwise noted.