Oliver! as Ensemble
Half a Sixpence
The Aristocats as Marie

Liz English was a Scottish actress.

Born in Elizabeth Reid in Scotland she was an actress and frequent backing singer for major stars such as Tom Jones as Engelbert Humperdinck. English was also the mother of Louise English, who went on to follow in her mother's footsteps.

Appearing in the revue Evening Stars with Benny Hill and alongside Ron Moody in Oliver!, English would make her most prominent singing appearance as Marie in The Aristocats 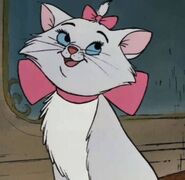 Marie in The Aristocats.
Community content is available under CC-BY-SA unless otherwise noted.