Leonard Frey was an American actor.

Born in Brooklyn, New York, he studied at the Neighbourhood Playhouse and received his first major success as Harold in The Boys in the Band, a role he would reprise for the film adaptation. He also appeared in such straight plays as The National Health (receiving a Tony Award nomination) and The Man Who Came to Dinner.

Frey also had a number of screen credits to his name, including films The Magic Christian, Where the Buffalo Roam and Tattoo and the television series' Mission Impossible, Quincy, M.E. and Barney Miller.

A performer in a number of stage musicals, Frey was best known for his performances in Fiddler on the Roof, originating the role of Mendel and later appearing as Motel Kamzoil in the film, a role which he had previously understudied (and which would earn him an Academy Award nomination.)

The Coach with the Six Insides (1962)(originated the role)

Fiddler on the Roof (1964)(originated the role) 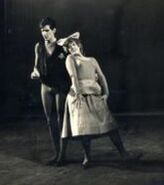 Wife and Elder Son in The Coach with the Six Insides. 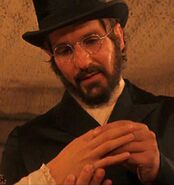 Motel Kamzoil in Fiddler on the Roof.
Community content is available under CC-BY-SA unless otherwise noted.
Advertisement