Lee Marvin was an American actor.

Born in New York City, he served in the United States Marines Reserve during the Second World War before becoming a stage actor. He made his screen debut in You're in the Navy Now and became a character acting known for his roles as gruff, aggressive characters in films such as The Big Heat, Bad Day at Black Rock and later Western roles in The Man Who Shot Liberty Valance (as the title character) and two roles in Cat Ballou, performances which earned him an Academy Award.

Marvin soon appeared in the ensemble pictures The Professionals and The Dirty Dozen with other roles including Ship of Fools, Point Blank and The Iceman Cometh.

Marvin used his gravelly singing voice on a number of occasions, duetting with John Wayne in The Comancheros, and most notably performing "Wand'rin' Star" in the movie musical Paint Your Wagon, which earned him a hit single. 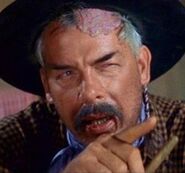 Tully Crow in The Comancheros. 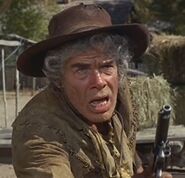 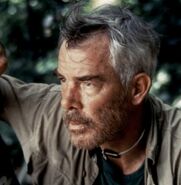 American Pilot in Hell in the Pacific. 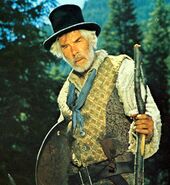 Ben Rumson in Paint Your Wagon.
Add a photo to this gallery
Retrieved from "https://goldenthroats.fandom.com/wiki/Lee_Marvin?oldid=47120"
Community content is available under CC-BY-SA unless otherwise noted.