Laurence Olivier was an English actor.

Born in Dorking, Surrey, Olivier came from a family with no theatrical connections, but impressed in several school productions, notably being called "already a great actor" by Ellen Terry after a performance of Julius Caesar. He studied at the Central School of Speech Training and Dramatic Arts and later joined the Birmingham Repertory Theatre Company, gaining his first major success with Noël Coward's Private Lives. Olivier gained great success in Coriolanus and Henry V, as well as making initial ventures into films, gaining an Academy Award nomination for his performance in Wuthering Heights. As well as an actor he was also a successful director, and his Hamlet was the first non American film to win the Academy Award for Best Picture.

As he grew older and ceased to play romantic leads, Olivier made his last Shakespearian stage appearance in 1968, playing Shylock in The Merchant of Venice. He gained another Academy Award nomination for Sleuth in 1972 (along with his sole co-star in the film, Michael Caine), Marathon Man and The Boys From Brazil. He was knighted and later made a lord for his services towards acting.

Olivier's first singing role came in Fire Over England, where he sings the song "The Spanish Lady's Love" as a duet, and later reprises it solo. He also appeared in the film version of The Beggar's Opera as Captain MacHeath, and in 1960 sang several pieces in character as Archie Rice, a fading music hall entertainer in the play and film The Entertainer.

The Entertainer (1957)(originated the role)

Michael Ingolby in Fire Over England. 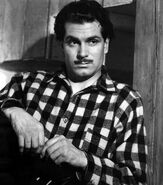 Captain MacHeath in The Beggar's Opera.

Archie Rice in The Entertainer.
Community content is available under CC-BY-SA unless otherwise noted.
Advertisement