Lacey Chabert is an American actress.

Born in Purvis, Mississippi, Chabert began her career as a child actress, gaining her first major role in the television series Party of Five and later appearing in the blockbuster Lost in Space. She would go on to make screen appearances in such films as Mean Girls and the television drama The Brooke Ellison Story.

Chabert also became well known as a voice actress, providing the voice of Eliza in The Wild Thornberries franchise, serving as the original voice of Meg Griffin in Family Guy and portraying Gwen Stacy in The Spectacular Spider-Man.

Chabert made her singing debut as Young Cosette in Les Misérables, in which she also understudied the role of Gavroche. Soon after she appeared as Baby June in Gypsy, and performed two songs in Babes in Toyland. She also provided the singing voice of Young Anastasia in Anastasia. 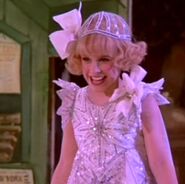 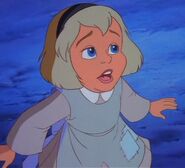 Jill in Babes in Toyland. 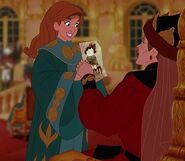 Young Anastasia in Anastasia.
Add a photo to this gallery
Retrieved from "https://goldenthroats.fandom.com/wiki/Lacey_Chabert?oldid=44835"
Community content is available under CC-BY-SA unless otherwise noted.