Kenneth Branagh is an Irish actor.

Born in Belfast, Branagh studied at the Royal Academy of Dramatic Art and gained stage success, many heralding him as the natural successor to Laurence Olivier (who he later portrayed in My Week With Marilyn), and causing him to be dubbed the finest Shakespearean actor of his age. He became associated with the works of William Shakespeare as both an actor and director, including Henry V, Hamlet and Love's Labour's Lost.

Branagh also appeared in numerous blockbusters such as Vakyrie and the Harry Potter series, and directed the dramatic comedy Peter's Friends and Marvel Comic adaptation Thor, to great success.

Though best known for his Shakespearian roles, Branagh has given a number of performances that have required him to sing. His first came in the television series Thompson, starring many of his Footlights costars, in which he duetted with Emma Thompson on "Have a Little Faith in Me". The second, Peter's Friends, had a similar cast who, as an ensemble, performed a comic take on "Orpheus in the Underworld" and a romantic rendition of "The Way You Look Tonight".

Branagh's next singing part came in a film he directed, Love's Labour's Lost, in which he also appeared on the soundtrack. He also sang a duet with Kevin Kline in the animated film The Road to El Dorado. A more considerable singing part came with his leading role as Archie Rice in a stage production of The Entertainer. 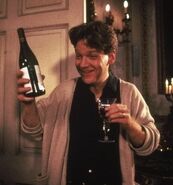 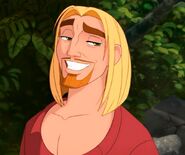 Miguel in The Road to El Dorado. 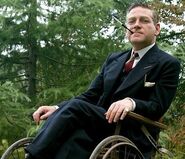 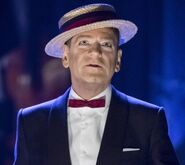 Archie Rice in The Entertainer.
Add a photo to this gallery
Retrieved from "https://goldenthroats.fandom.com/wiki/Kenneth_Branagh?oldid=45511"
Community content is available under CC-BY-SA unless otherwise noted.