Ken Jennings is an American actor.

Born in Jersey City, New Jersey, Jennings got his first acting job with the Halfpenny Playhouse in New Jersey and soon made his way to New York, becoming well known after his Drama Desk winning performance in Sweeney Todd: The Demon Barber of Fleet Street.

Though mostly known for his musical roles, Jennings also appeared in a number of straight plays, including All God's Chill'uns Have Wings and London Assurance as well as appearing in several film and television productions including The Last Unicorn and Mildred Pierce.

Jennings made a large number of musical appearances on stage, the best known being his second, originating the role of Tobias Ragg in Sweeney Todd: The Demon Barber of Fleet Street, which he reprised for the official video. He also appeared in the original casts of several ensemble musicals including The Gift of the Magi and Mayor.

The Little Rascals (1987)(originated the role)

A Christmas Carol (1994)(originated the role) 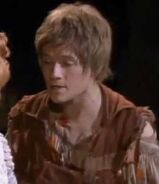 Tobias Ragg in Sweeney Todd: The Demon Barber of Fleet Street.
Add a photo to this gallery
Retrieved from "https://goldenthroats.fandom.com/wiki/Ken_Jennings?oldid=49300"
Community content is available under CC-BY-SA unless otherwise noted.